Who Put You In Charge? (Creating Fictional Governments) 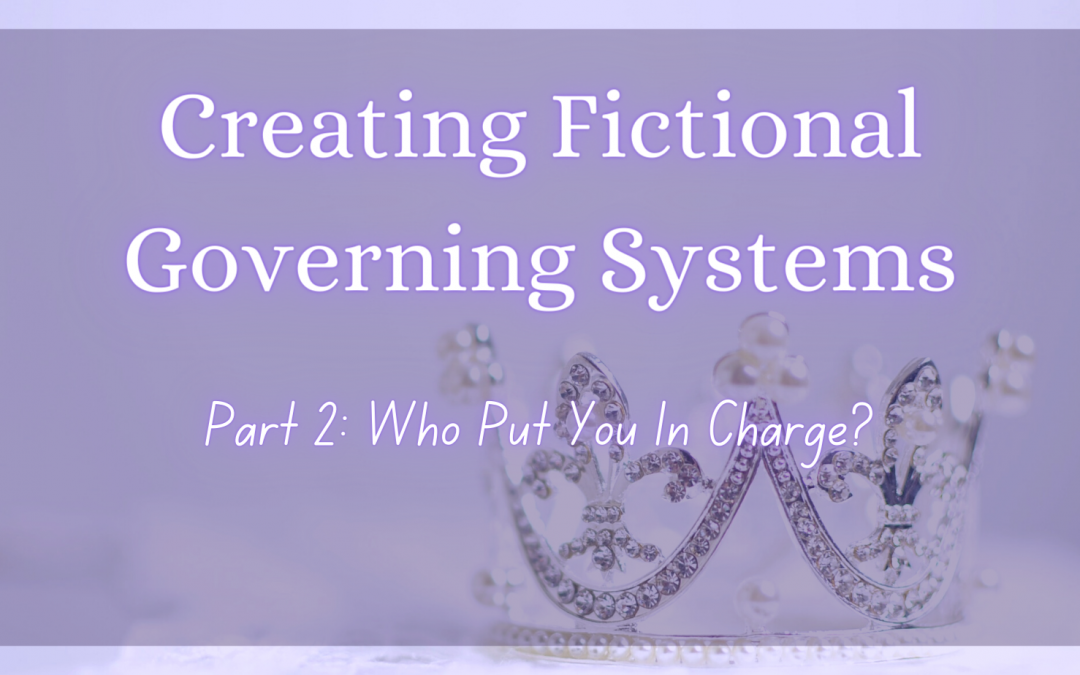 The Point Of Government

Last week, we discussed possible reasons why people living in a society might allow a governing system to rule over them. This week, we’ll be answering two very important questions.

Question #1 What’s the point of a government/political structure?

I started answering this question a few weeks ago in my blog about Creating Fictional Societies using the method of Cause and Effect:

Governing systems are supposed to maintain law and order within a society. People don’t always agree with each other (shocking! I know), so someone needs to settle disputes, make judgments, and create or enforce rules and laws.

There are many different types and systems of government. Here are a few:

Meritocracy – People are chosen for government based on merit/skill.

Democracy – People are chosen based on the choices of the majority.

Aristocracy – The wealthy and elite nobles are in power.

Theocracy – Religious leaders are in power and acting on the behalf of who/whatever their religion serves.

Monarchy – A single ruler is the head of the government.

Oligarchy – A small group of wealthy individuals or families is in charge.

Anarchy – No one is in charge. Everyone is expected to govern themselves.

There are plenty of other forms of government, so I suggest that you do some research! Once you figure out the type of government you want your society to have, you can move on to the next part of the process.

So far I’ve looked at the government as a system. What about the individuals who make up a governing system? Who is in charge?

The price of power

Question #2 How does/could someone receive the “power” to govern others?

It’s not like everyone in a society woke up one day, looked at a random person, and said, “Hey you! Wanna tell all of us what to do?”

There are many ways for the average (or not-so-average) citizen to find themselves in a position of authority. In today’s blog, I’ll cover the top five ways to become a leader.

Who put you in charge? #1 The People

If you’re great at making friends, you may just find yourself in charge…of everything.

If you’re intelligent, charming, and charismatic, you may draw people in. People may turn to you for advice, or ask you to be in charge of plans, events, or entire societies.

When the majority—the citizens—are in charge of choosing who they want to govern them, they’ll naturally choose people who they think will act in their interests, has similar values to them, or who they simply like as a person. And on the flip side, they’ll demote anyone who they don’t like or doesn’t agree with their values and beliefs.

Armies can be bought with money, but they’re more useful (and trustworthy) if you’ve managed to earn their loyalty.

Either way, sometimes all it takes to receive power is to have a bunch of people with pointy sticks follow you around. Who knew?

Who Put You In Charge? #3 Diplomacy

Being put in charge by diplomatic means is a two-edged and very sharp sword.

Diplomacy could be as simple and peaceful as marrying into power or being friends with the right people, or it can be as dangerous and violent as threats or assassinations.

Coming into power with the help of others means you may have an obligation to act in their best interests and choose their side should they ask it of you—or risk losing their support, your power, and possibly even your life.

Who Put You In Charge? #4 Religion

If there’s a community and the majority of them follow the same religion, then it makes sense that they’d choose someone that follows their religion—or perhaps the original person who created the religion (if they’re alive).

This arrangement could give rise to a peaceful society just trying to live moral lives, or a full-blown dangerous cult.

The choice is yours!

Who Put You In Charge? #5 Tradition

Tradition is power. After all, if the system’s not broken, why fix it?

The Downfalls Of Having Power

In the next couple weeks we’ll be discussing the consequences that arise from being put in charge by certain means, and reasons why citizens in the average society might actually allow a despotic government to stay in power.

Be sure to subscribe so you don’t miss my next blogs!

What is your favorite type of government to write about?

Let me know down in the comments!