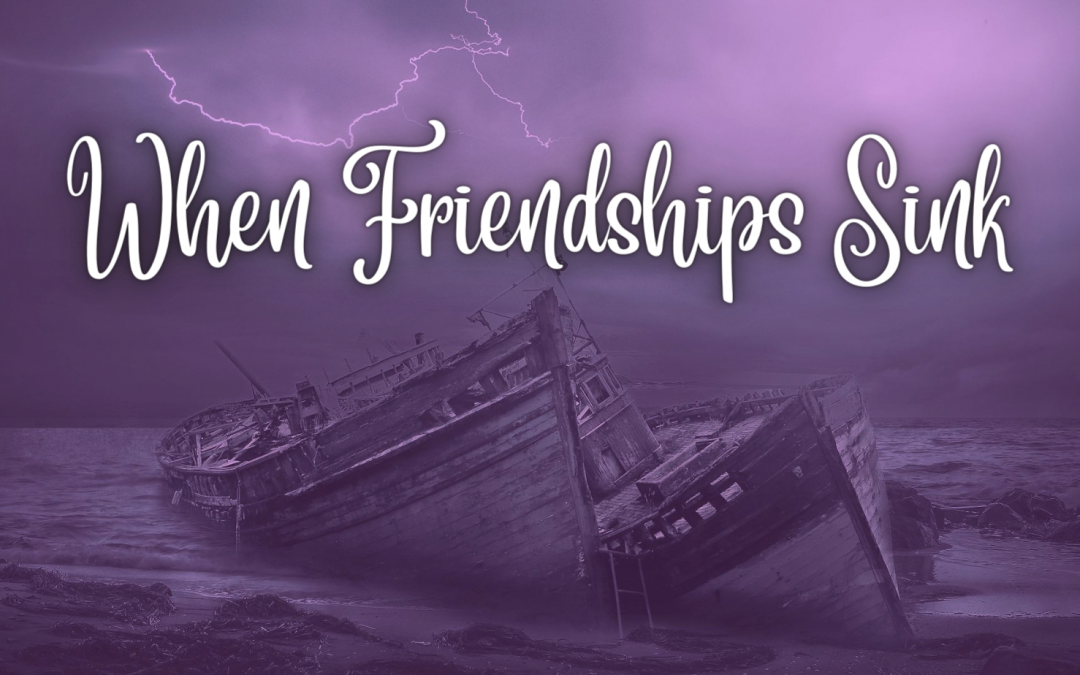 Friendships. They start, they grow, and too often, they end.

I had planned to talk about why we need friendship in today’s post, but as I was writing I felt that I should leave that topic for a future blog.

When I was younger, I thought I’d be friends with the people I grew up with forever. Change wasn’t a word I understood as a child, even if it was always around me.

I understood that I was getting taller, and that the leaves on the trees would go from green, to multicolored, to gone, as the months passed.

But my friends grew taller with me, and every season brought fun new things for us to do. So I never realized how much we changed on the inside, as well as the outside.

As we grow, our interests and goals for our lives change.

A few years ago I realized that I rarely had real conversations with my friends anymore. I had no idea how to relate to them, because we were no longer interested in the same things—and yet I knew so much about them that there was hardly anything I could ask them about that I didn’t already know.

I knew them so well that we had become strangers, capable of nothing but small talk and awkward attempts at humor.

Even with all those difficulties, I didn’t realize that we’d fallen from friends to acquaintances. I thought I could hold onto what we used to have. But after moving to the Netherlands for six months, it finally set in that all the friendships I once had were finally and officially over.

The ending didn’t come from a disagreement or anything dramatic like that.

It was just life doing its thing. Creating change.

I had no closure. Nothing to help me understand what had happened. Just pictures on Instagram which showed me that my friends had made new friends, and had new exciting things going on in their lives. Things I wasn’t a part of.

At the time, I wished that there had been something melodramatic or serious. I would have preferred a heated argument and declarations of ended friendships to the awkward and silent ending of simply… falling out of friendship.

Five Ways To Move On

It may take some time to get over losing friends—even if your friendships didn’t end badly. But don’t let yourself spiral down into self-pity and depression as I did.

Now, I’m definitely not about to tell you to “just get over it” because that’s not how it works (or at least, it didn’t work that way for me), but I can share five things with you that helped me when I was devastated after realizing I’d lost all my childhood friends.

Disclaimer: A hobby is not intended to replace people and friendships—even if it does take up some of the time you used to spend being with your friends and gives you something fun to do.

The real perks of having a hobby are that it gives you something interesting to talk about (other than the weather), and opens up opportunities for you to befriend other people who share the same interests as you.

#2 Don’t Shut Yourself In Your Room

It’s tempting to lock yourself away for all of eternity when you’re lonely and upset (I’ve been tempted to do it on more than one occasion), but all it does is give you a quiet place to continue being miserable. Not only that, but it can encourage your misery.

Of course, not shutting yourself in doesn’t mean that you have to go out and be the life of the party, but you should definitely try to get out of the house—or at least your room—if you can.

Go on a walk, bike, and jog. Visit the library or a park. Clear your head. Spend some time with your family and strengthen your relationships with them.

It really does help!

Put your thoughts down on paper—not to dwell on them, but to work through them.

For me, writing poetry in my journals gave me a chance to let all my emotions out in a way that was not only healthy, but helpful.

Your thoughts and poetry don’t have to be pretty and profound. It’s for you, so as long as it helps you, it’s perfect.

In other words… make new friends!

Easier said than done, I know. Imagine having to actually go out, talk to people, and make an effort.

But all jokes aside, making new friends can be difficult when you’re over the age of eight.

Start off slow. Try to enjoy each conversation you have, and try not to rush ahead and go out to buy matching best friend necklaces.

Building friendships take time… as annoying as that is.

Before I finally found a new friend group, I was a bit of a mopey mess…

I cried at least once a day (we were quarantined around that time which didn’t help at all) and I didn’t want to do anything but lie in bed and write.

But after I reach my lowest point of feeling lonely, angry, and confused, I started crying out to Jesus.

I asked—begged—him to send me some friends.

It took a while before he fully answered my prayer, but he did answer it, and he’ll answer yours as well.

Two are better than one, because they have a good reward for their toil. For if they fall, one will lift up his fellow. But woe to him who is alone when he falls and has not another to lift him up! Again, if two lie together, they keep warm, but how can one keep warm alone? And though a man might prevail against one who is alone, two will withstand him—a threefold cord is not quickly broken.

A good friend is hard to find, and harder to keep, but it’s worth the extra work.

Since we’re on the topic of friends, introduce yourself and name your favorite pastime/hobby in the comments below!

And there’s still time to enter the Kingdom Writer’s Guild spring flash fiction contest, so be sure to check out the details here!