Lighting The Match: Finding Your Why 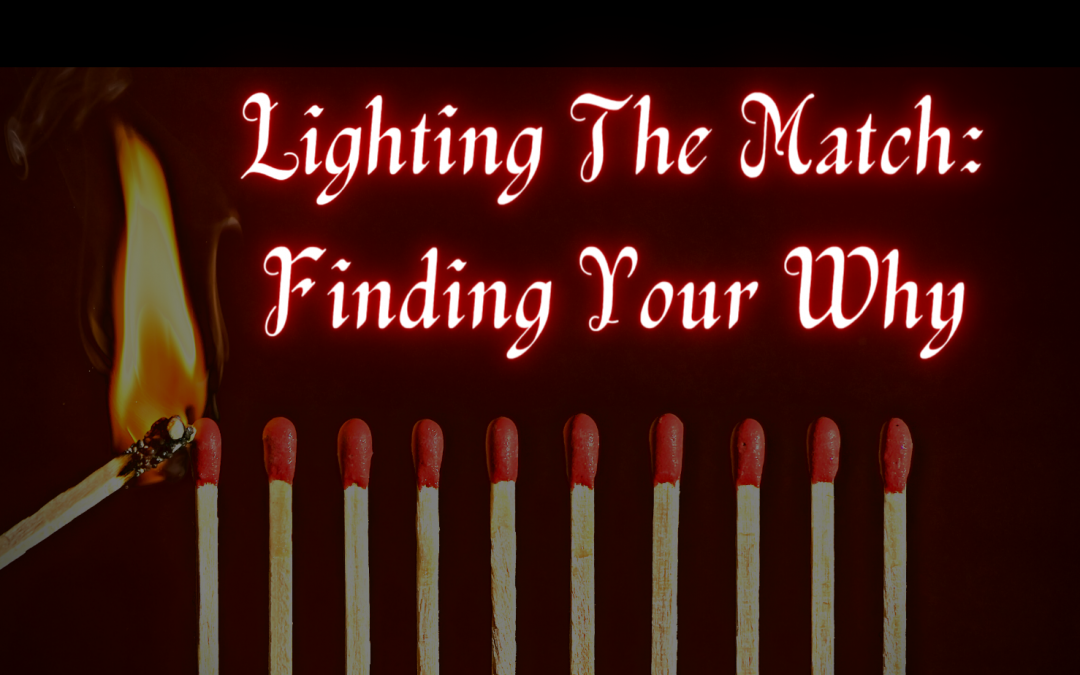 *Note! This is the final and third part in a series I’ve been writing about following your dreams. Click to read part one & part two.

We all have a reason for doing the things we do, even if we don’t always take the time to think about what our reasons are.

But these reasons can actually be really important. Especially if you’re trying to follow your dreams.

When I’m going through a tough time and I’m tempted to give up on my writing, I like to read a vignette (short scene) I wrote around two years ago—which I’ll share with you now.

I’ve edited it a bit to make it shorter and more readable, but for the most part, it’s the same thing I wrote two years ago when I first started to get excited about writing.

Lumarrae: Life Of The Balanced

Light and dark were two concepts I was familiar with. You could never have one without the other.

But in Aethiruna, there was only light. Every inch of the realm was pure, beautiful, and bright. It was all so happy—but then, was it? In order to have joy, would you not need to know sorrow first?

Since the beginning of our lives, myself and my fellow Aethirines only knew one side of the spectrum.

Now, I am able to report that all we knew was peace, joy, love, celebration, light, creativity, and wisdom.

We understand all emotions, now. All feelings, both positive and negative.

The others long to go back, but I am thrilled to be moving forward.

Feeling such horrible emotions made my appreciation for the good ones grow stronger until it was almost overwhelming.

The others share this opinion, even if they do not yet realize it.

No, the only thing they wish to do is complain and pine for the days when we knew nothing. We were ignorant and naive.

Perhaps it was by complete chance that everything changed, but Donum Donare seems to have created everything with a purpose, so it’s possible he created me this way on purpose as well.

All of us had been amazed by the outer world—or rather—the Earthen realm, as Donum Donare named it.

Although we all admired this new creation, none of the others were as struck by it as I was—despite Alestarra’s claims to the contrary.

They all merely saw the world for what it was, but I… well, I looked deeper.

Contrasts. Everywhere I looked, I saw them.

Hot and cold, dry and wet, dark and light.

The difference between our realms was fascinating, the creatures as well.

I wanted to see anything and everything that I could, but the others were content to pay attention only to what was before them.

When Donum Donare made his changes to the Earthen realm, I would go search for similarities in our own realm. It was through this searching that I first met the Zeroc now called Malder.

I was walking towards my realm observatory when I noticed the Zeroc watching some of Aethiruna’s creatures go about their business with a look of fascination on his face.

I took a detour, coming over to him. Of course, I’d seen Zerocs before this, but due to Donum Donare’s continued acts of creation, I hadn’t spent as much time around them.

They were an interesting sight to be sure.

They looked so light and delicate, as if they could be completely destroyed if one were to simply look at them too hard. Donum Donare had said they were not yet finished, which confused me.

Why had he finished us, but left the Zerocs incomplete? What were his plans? No doubt they would be spectacular—they always were. But I was curious to hear what the Zeroc thought about his own situation.

I introduced myself, and the Zeroc’s fascination immediately turned from the creatures, to me.

I was bombarded with question after question about my talents and gifts. I told him I was created by Donum Donare to create, and seek out what is hidden.

He asked me what that meant, and at the time, I couldn’t answer him. I merely said that I saw things that others could not. While that was true, I now know that I had dreadfully underestimated myself, and Donum Donare.

In return for his question, I asked one of my own. Why was he out here watching the animals? Most Zerocs spent their time in the feasting hall, orchards, or by the springs, and yet, here he was, watching some creatures.

He told me he was merely curious, and of course, that piqued my interest. It was not often that—well, I had never found anyone with nearly as much curiosity as me. Everyone had always been content to simply take things as they were… but I wanted more.

It appeared that the Zeroc did as well. He went on and on about how fascinating everything in Aethiruna was, which gave me an idea. I took the Zeroc with me to my observatory so he could see the Earthen realm.

Just as I suspected, he was entranced.

I had no idea that there would be a chain of events that followed my meeting with the Zeroc that would change everything. If I had the chance to go back and choose a different outcome, I admit that I wouldn’t… despite all the bad that sprung from this event, a lot of good was done as well.

We’ve reached an understanding of life that we never could have dreamed of before. I’ve learned that in all things there is a balance, and without balance, life cannot be lived out to the fullest extent.

Malder went too far… I know he did, and because of that, I will say I am… concerned.

He believes I agree with him. That I am on his side.

He thinks… well, perhaps it doesn’t matter what he thinks. He’s wrong after all.

I care nothing for his dreams of power and control.

I am content to merely watch the mortals live out their lives, now filled with balance.

This small scene contains my “why”, and reading it relights the spark that keeps me going when writing doesn’t feel fun or easy.

Reading that vignette reminds me just how much I enjoy inserting deep themes and exploring difficult or confusing topics in stories.

And that’s the reason God called me to write. It’s not just because I have a story to tell, or to touch lives (which are both valid reasons). But I was called to write because I am called to learn.

Through my writing, I get answers to the questions that come up in my everyday life. Whether I see something in the news, hear something from the people around me, or I’m just going through a terrible time in my life, writing characters and themes about what I’m going through has helped me put these difficult topics in a new perspective. Which has helped me deal with them in my own life.

I also know that I’m not special. My experiences and questions aren’t unique to just me. If I’ve had these issues, then chances are that other people will as well. And if that’s the case, then my stories would help them just as much as they’ve helped me.

So that’s it. That’s the reason behind why I write, and why I’ll continue writing for the foreseeable future.

But you may have a different reason for what you do. And that’s totally fine!

Nobody is the same (crazy, right?), so it’s not surprising that you may have a different reason to keep going.

But if you don’t know what it is, how are you supposed to figure it out?

How to find your why

There are plenty of ways to find your why, but this is the one that worked best for me.

Think back to when you first started doing the thing you love and ask yourself these questions (it may help to journal them).

When were you the most excited about doing the thing you love?

Was it because you were trying something new?

Were you working on a particular project?

If you have a process you follow, do certain parts of the process excite you more than others?

When did you first realize that you loved doing the thing you’re currently doing?

What about it inspires or excites you?

Knowing when you were the happiest doing the thing you love may help you identify what first lit the spark.

Just like how I realized writing that short scene was what first got me excited about writing—because I realized I could explore deep themes and questions I needed help with.

Next, you definitely want your journal. List all the reasons you like doing what you love, then circle your strongest reasons.

3. Identify & Test Your Why

Maybe one of the reasons you circled stands out, or maybe they all seem equally relevant. But that doesn’t matter.

The important thing to ask yourself is if your why is strong enough to keep you going when things get really hard, and your dreams don’t seem as fun as they used to.

It’s possible that you won’t know for sure whether your why is strong enough until you actually do come to a point where you want to give up, but if you consider these things ahead of time, you won’t be taken off guard.

Your “why” Is An Anchor

If your why is strong, then when the storms of life come, threatening to wash you and your dreams away, your “why” will be your anchor. And as long as you hold onto it, you’ll be able to stay strong and resist being pulled off course.

What is your why?

If you missed it, the SOKW Summer Flash Fiction Contest is going on right now! Click here to learn more, or to enter!