Creating Fictional Societies With Cause & Effect 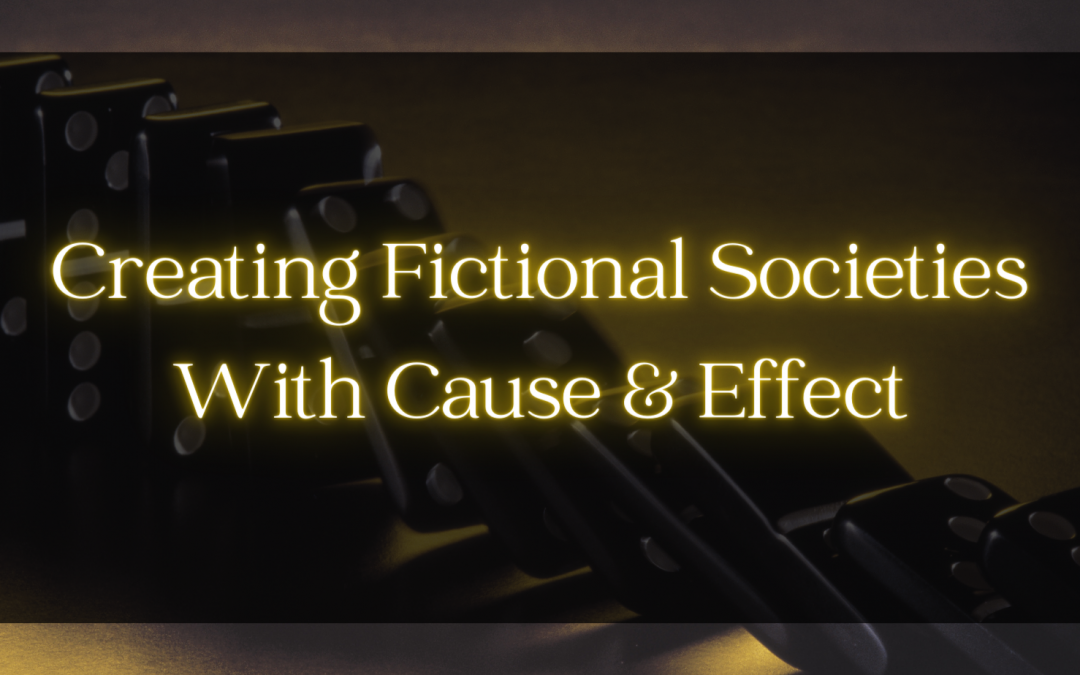 In today’s blog, we’ll be discussing how to create fictional societies from scratch by using the cause-and-effect method.

When I first started writing fantasy, I focused more on the plot than the worldbuilding—mostly because I had no idea how to world-build.

Worldbuilding overwhelmed me because it seemed complicated and very confusing. But when you find a method that works for you, worldbuilding can become a lot easier (not to mention interesting and even fun).

Cause and effect is something of a logic-based approach to worldbuilding.

For example, because A happens, B will happen. And because B happened, C will happen, and the domino effect just continues on from there.

Because there are resources in an area (water, food, options for shelter, etc.), people will settle down in that area. These people will all have different, skills, abilities, and knowledge from each other.

Bob is known for building some really great wooden huts. Anna knows how to make some fantastic woven baskets. Donna knows how to grow green beans better than anyone else in the entire meadow, and Dave is a real cow whisperer.

Because their skill sets vary, they might want to learn from, barter, and trade with each other to get the things that they want or need.

From there, a society will truly start to develop. As homes are built and people are fed, they’ll start having families. Children will grow up and start families of their own, and the population will increase.

As the population increases, resources in the area may decrease, so some people may decide to leave the area to find other places with more resources.

The people who leave the area will bring with them the skills and knowledge that they gained while growing up, so when they settle in new areas with different people, there will be an exchange of ideas and traditions.

That’s where the idea of culture comes in. Cultures are built up of different ideas, thought patterns, methods, traditions, and societal values that a group of people shares with each other.

When people from different cultures meet, some of their values and ideals may align, but others could be completely different.

When more values and ideals align, it causes good relations between people from those different cultures. When they’re mostly unaligned, conflicts will arise.

The smallest of villages can turn into the largest cities with time and the consequences of cause and effect—or can they? Why would the people in these communities decide to work together and share land or resources? Why wouldn’t they just fight over them? What’s to stop people from taking whatever they want from their community without doing their fair share of work?

Any functioning society needs a way to keep law and order within its community—otherwise known as a system of governance.

I’ll discuss creating fictional governments in next week’s blog, so be sure to stay tuned!

In the meantime, let’s review how the average society might form with the cause-and-effect method.

Understanding how societies usually form in the real world will help you create fictional societies of your own. Even if you want your fantasy world to be different, this is a great place to start. Know what the rules of reality are before you decide to break them. If you break those rules, make sure you broke them intentionally, and that they make sense in the context of your story.

Have you ever used the cause-and-effect method to world-build?