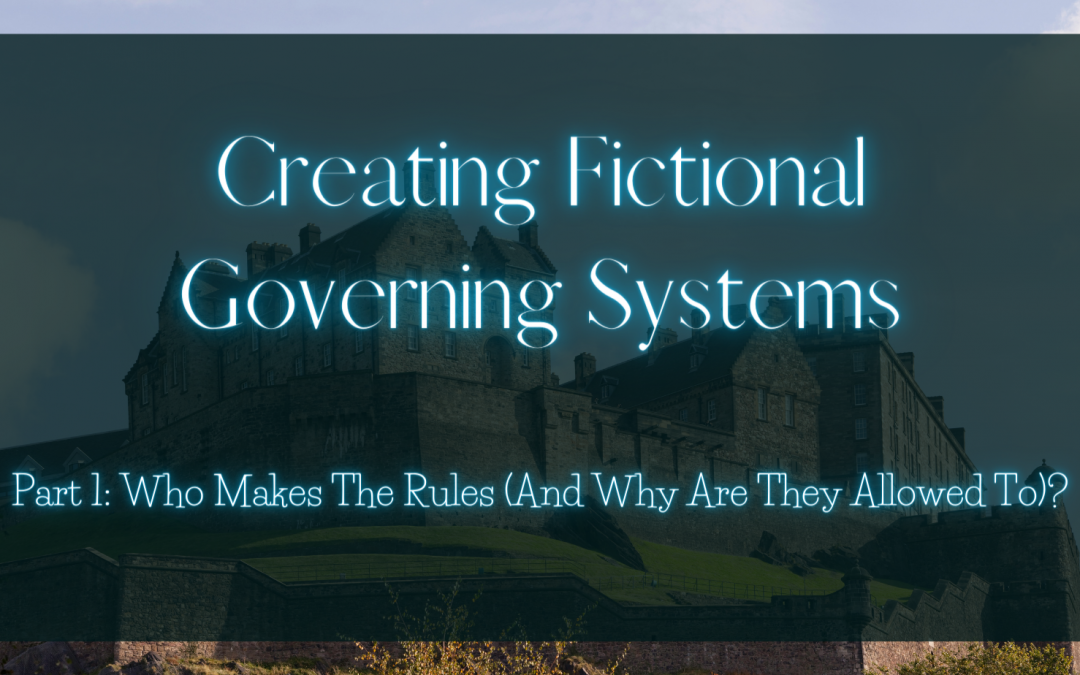 Last week I posted a blog on creating fictional societies using the cause-and-effect method. This week we’ll be discussing how to create fictional governing systems.

This will be a two-part blog (at least) so be sure to join my newsletter so you won’t miss the next installment of this series.

Governments are the result of a growing society. After all, rules are only necessary when there are people around that could/would break them.

Just like we did last week with creating a society, we can use a simple method to create a governing system, similar to the cause-and-effect method.

In this case, it’s a matter of asking a lot of questions—and then answering them.

So let’s go ahead and answer the big questions you may have when creating fictional governing systems for your story world:

Let’s start with one of the biggest questions.

Question: Why would anyone willingly let someone else tell them what to do?

Answer: They wouldn’t. Not unless they get something in return.

When you’re world-building governments, it’s helpful to ask yourself what exactly the governing system will do for its citizens.

What would the people get in return for following the rules of the person/s governing them? Why is it worth it to be under the control of someone else? What can the government do that citizens can’t do for themselves?

If the governing system demands taxes, where does the money (or whatever your society accepts as payment) go? Does it go into hiring people to fix the cobblestone streets in the marketplace? Providing for widows, orphans, and those with disabilities? Funding an army or militia to protect the society?

Does having a governing system make things easier for citizens? Does the government help merchants secure safe passage to and from different societies so that the trading industry can thrive? Does the governing system make it easier (and less risky) to start a business? Are the citizens able to buy or receive all the things they need from other societies and each other?

Does the governing system provide opportunities for citizens or their children to learn? (You may want to figure out what education looks like in your society—whether it includes finding and hiring educators to educate children publicly, or supporting/funding guilds that take on apprentices, or something completely different and unique to your world.)

Does the governing system look for ways to improve the quality of life for its citizens? Do they employ researchers, scientists, or scholars to research cures for illnesses, new inventions, and innovations? Are they dedicated to improving infrastructure? Finding solutions for the problems that citizens face? Do they build public libraries? Distribute books or information? Conduct experiments? Or do they fund private companies/industries/individuals that do?

Does the governing system schedule/host holidays, festivals, or feasts? Do they encourage artists and entertainers, or whatever the people in your society deem “acceptable” or “fun”?

How Many Do You Need?

It’s possible that your governing system doesn’t have all ten of these advantages—it may only have/control 2-6 of them—or maybe it has way more than ten incentives!

Either way, your governing system must have some method of keeping the citizens in your society happy (unless you’re intentionally trying to make the citizens unhappy and spark a revolution, of course).

In any case, these are some great questions to start with as you begin creating a government for your fictional world. In the next blog in this series we’ll be discussing the makeup of a government: who’s in charge of your government, why, and how did they get there?

What is the strangest rule that your fictional society/government created for its citizens to follow?